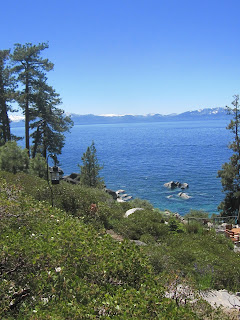 Grace’s canoe paddle cut through Lake Tahoe’s water and left a chain of sparkling rings on the blue surface.
“Is this a… good surprise?” she yelled again over her shoulder.


From the back of the flat bottomed canoe her older cousin Katherine sighed impatiently.
“Stop asking me.”


The canoe rocked as Grace pulled in her paddle.  She pivoted quickly around in her seat.  Water stained dark circles on her blue jeans.
She peered deep into Katherine’s dark brown eyes looking for any hint of the surprise.

There was none.
“Ask again and we’re going home. I mean it!”

Grace turned around and continued paddling.
“It better be good,” she mumbled under her breath. “My arms hurt.”

The nine-year-old looked up.

Even in June the high peaks of the Sierra Nevada mountains were snow covered.  They called this area  Da ow aga as their ancestors had for over 9,000 years.

The girls were Washoe Native Americans.  Like the ancient Washoe they spent summer and early fall by Lake Tahoe.