When Edna Ferber (ed- nuh fur-ber) was born in Kalamazoo on August 15, 1885 - life was harsh. Anxiety ran high in the family home on South Park Street.

The Ferbers were Jewish. Many people disapproved of others practicing that religion. They hurled insults as the Ferbers went to school, their synagogue (sin-uh-gog) or worked in their store.


The repeated bullying hurt everyone, especially Edna’s father. He spoke with a Yiddish accent, was blind and in frail health. While Edna was still young, he died.

With a childhood filled with heartache, Edna could have become bitter and insecure. Instead, she picked up a pencil and paper and began to write.  Her first job was as a newspaper reporter. Edna then wrote novels, short stories and plays based on her observations of America’s working class. People of different colors and backgrounds who met their ordeals with courage. Their struggles were balanced with consideration for others. 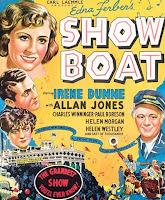 Her book So Big won a Pulitzer (poo l-it-ser) Prize. Another popular novel, Show Boat, was transformed into a Broadway musical. Years later, it became a movie as did her

Edna Ferber never forgot her unhappy youth. She fought bigotry, not physically, but with written words.  In 2002 the United States Postal Service issued a Distinguished Americans postage stamp in her honor. 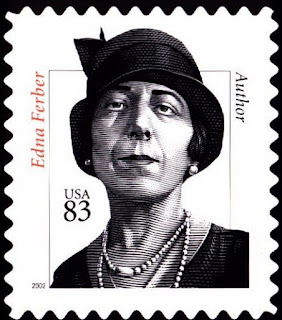 Posted by words4sail at 6:32 PM No comments:

Learning to Love with Pops 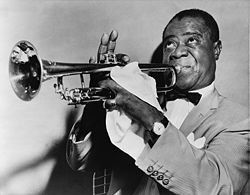 Along the snowy street a black limousine’s tires crunched slowly.


Under a street corner's light a flurry of snowflakes swirled around Daniel, Russell and Thomas. At first they did not notice the shiny car or its lone occupant as he got out of the car.


The appearance of a man’s rubber galoshes with bits of slush made the boys raise their heads briefly.
A chorus of greetings left their lips.

To the rest of the world the man standing in front of them was the legendary jazz musician, Louis Armstrong.

To the kids of Corona he was just “Pops”.  He and his wife Lucille lived on nearby 107th Street.

“Good morning my fine gentlemen” answered Pops.  His voice rumbled low and gravelly “What is the news of the world today?”


“The transit strike is almost over,” said Thomas his cold cheeks as red as his hair that peeked from under his wool cap. “The buses and subway trains should be running by tomorrow.”


“Boy, my dad will be happy,” declared Daniel.  “He said driving into Manhattan every day with Mr. Green was starting to affect his good nature.”


“Does Mr. Green have a nice word about anything?” asked Russell stuffing the last curled newspaper into his bag. “It seems he starts the day be breathing in all the negative air and then spends the whole rest of the day getting rid of it.”


Pops’ enormous white teeth shone as he laughed at the boys’ assessment of the unpleasant neighbor.


“He just has the miseries and instead of telling them goodbye, he says ‘hello’ come on in and stay a while.  Over the years he has become a true curmudgeon.”
"What's a crumb mud genie?"

To read the rest of the story please contact words4sail@gmail.com
2011 © Words4Sail
Posted by words4sail at 5:11 PM No comments:

The Three Sams of AngeIs Camp 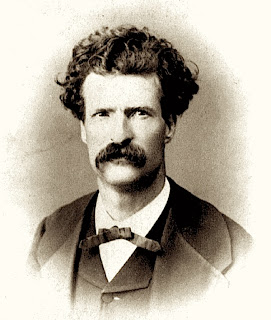 
A large wet snowflake fell into Little Sam Newfield’s right eye and temporarily blinded him.
His right foot missed the crude wooden boards that served as sidewalks in Angels Camp. Instead, he stepped into oozing mud and sank down to his ankle.

Flapping his arms madly to regain his balance he was about to tumble headfirst into the sludge when strong arms circled his chest to puII him upright.

"Today is too cold to be taking a mud bath.”

“Thank you kindly,” he breathlessly cried.


“Let’s find some cover,” said the stranger.”This freezing California rain has slippery slid under my collar and is playing an icy tune down my spine.”
Quickly, they sloshed their way to the covered entry of the Angels Hotel.

There the nine- year old dried his wet face and took a good look at his rescuer.

The stranger was about 30 years old with unruly brown hair that stood straight up as he took off his felt hat and shook off the snow. In his mouth was a corncob pipe.

To read the rest of the story please contact words4sail@gmail.com
2011 © Words4Sail
Posted by words4sail at 5:01 PM No comments:

The baby lamb Margaret Aldrich had been sketching suddenly scampered over to its mother at the field’s opposite end.

From behind her the eight year old heard a soft laugh.

“Aye, young Herdwick lambs can be difficult subjects when hungry for their mother’s milk.”

Margaret turned to face a tiny bent over old woman.  Chubby and dressed in a heavy mismatched tweed skirt and jacket she wore a shapeless navy hat with a frayed ribbon jammed over her short gray hair.

“Can I see your drawing?” she asked walking over to the low stoned wall where the girl sat.
To read the rest of the story, please contact words4sail@gmail.com
Posted by words4sail at 4:56 PM No comments: